Every seasoned torrent user knows or has at least heard tales of Demonoid. That almost mythical torrent promised land where every obscure file has an associated reliable magnet link and where all the trackers work, all of the time.

Demonoid is one of the oldest BitTorrent trackers that is still functional and is one of the most trusted names in the space. The Demonoid tracker first went online in 2003, when it was launched by an anonymous Serb known only by the pseudonyms “Deimos” and “Zajson”.

From the beginning, Demonoid set itself apart as a premier torrent indexer thanks to the excellent organization of the platform and its no-nonsense policy to spam and malware.

By December 2010, Demonoid had climbed the ranks and featured at number 502 on Alexa’s list of the most popular sites in the world. At that time, the site had over 260,000 torrents indexed and an estimated 3.5 million peers.

However, like many other high profile torrent trackers, Demonoid has had its fair share of downtime. The site has gone offline severally due to attacks from governments from around the world. The most prominent of this downtime was when the website took its most extended hiatus ever, going offline in July 2012 for nearly two years.

After many years of sporadic appearance and disappearances, Demonoid started to come back online in August 2019 under the Domain name dnoid.to. Like with older iterations of the site, however, registrations open intermittently. Otherwise, you are subject to an invite-only system.

As one of the oldest torrent communities, Demonoid has gone through many ups and downs over the years. Over the years, the site has changed multiple domains, disappeared for extended periods, but it always comes right back.

However, one such hiatus last summer was very different. After over two months of going offline, one of the platform’s moderators, phaze1G announced that Deimos, Demonoid’s founder, died in an accident.

Nevertheless, the spirit of the community was not broken as they came together, determined to honor Deimos by carrying his legacy forward and preserving the site. This group effort resulted in the birth of Dnoid.to, the new Demonoid.

The new site maintains an identical aesthetic to its predecessor; however, at the moment, it does not host its torrents. The website works like a magnet index that allows users to add their links to provide content to the community.

According to phaze1G, “The point is not to compete with the original Demonoid or to be above other public torrent sites. It’s just to keep a memory of Demonoid and its founder Deimos, who is well-known around old folks and who set high standards for torrent communities ever since 2003.”

However, powered by one of the most active communities in the torrent-sphere, the site works. The new website provides a clean interface and high-quality torrent links to all the latest movies, TV shows, games, software, and eBooks.

Notwithstanding, it is not uncommon to have torrent trackers like Demonoid blocked by your ISPs. If you face this kind of issue, you can bypass the blockage by using a VPN. Alternatively, you can use any of the quality alternatives to Demonoid on this list. 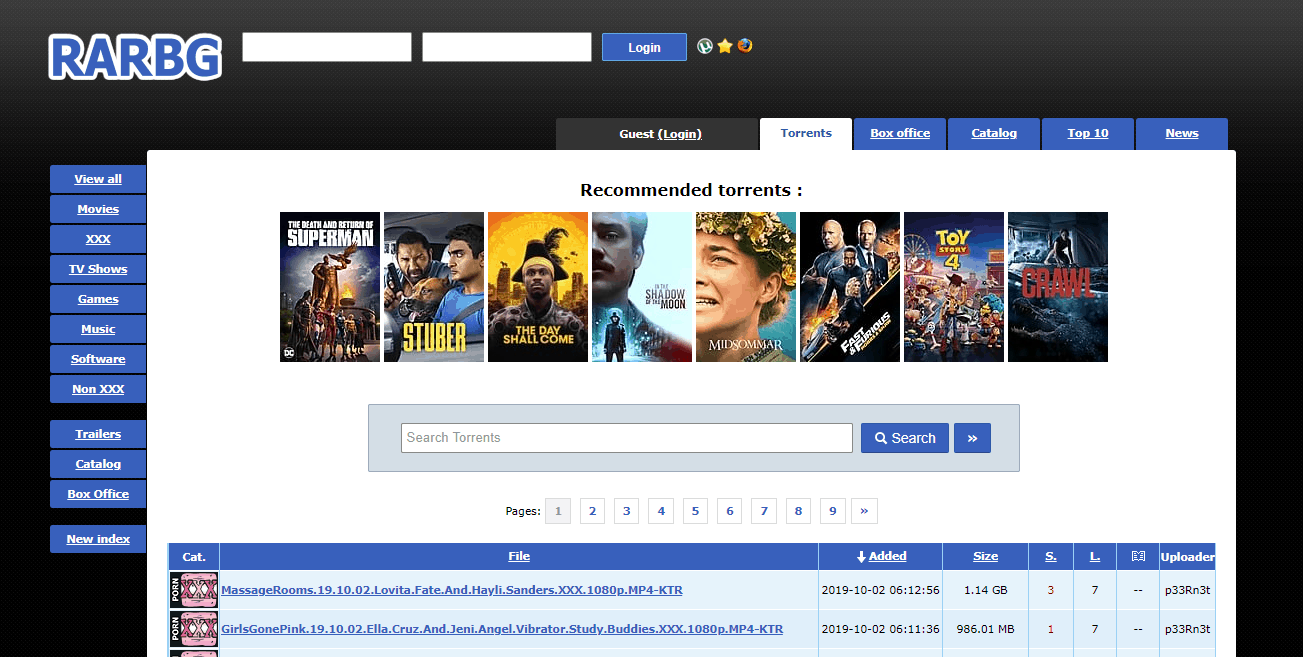 If you are a regular bootleg viewer, you’ve probably seen their name brandished on many titles. This torrenting giant is one of the most popular torrent trackers and a worthy alternative to Demonoid during outages.

Initially launched in 2008, the platform has since grown to become one of the top magnet link providers, boasting traffic of up to 500k visitors daily.

Aside from its massive user base and great store of torrents, RARBG has other positives. The platform features a clean and intuitive UI that makes browsing the site and finding the content extremely pleasant.

However, like with Demonoid, without a VPN, you may have trouble visiting the platform. RARBG is blocked by many ISPs and in several countries like Saudi Arabia, United Kingdom, Denmark, Portugal, Pakistan, Bulgaria, India, Morocco, Kazakhstan, Belgium, United Arab Emirates, Ireland, Australia, Finland, and Greece.

Another legendary name that is as big as Demonoid in the torrent space is IsoHunt. For the longest time, they were one of the largest magnet link providers in the universe.

First started in 2003, IsoHunt quickly became of the internet location for peers and indexing torrents. With 7.4 million unique visitors as of May 2006, isoHunt was one of the most popular BitTorrent search engines. Thousands of torrents were added to and deleted from it every day. At its peak, the service reached over 13.7 million torrents in its database and 20 million peers from indexed torrents.

However, the website was taken down in October 2013 after a protracted legal battle with the MPAA. Nevertheless, by the end of that month, two sites with content presumably mirrored from isohunt.com popped up and began to garner interest from the torrenters. One of these sites— isohunt.to is now the de facto replacement of the original site despite not being associated with the old staff or owners of the website.

The new IsoHunt continues the policy of indexing torrent files to all of the best content on the web. The site features a neat design that files torrents into categories like that for music, videos, movies, books, software, programs, apps, and much more.

Visitors to the platform can download an unlimited number of torrents without any restrictions, limitations, or any signup requirements. Furthermore, unlike many private and semi-private trackers, there is no restriction on uploading torrents unto the platform.

Like Demonoid, IsoHunt currently ranks among the authorized peer to peer torrent providers of the BitTorrent network.

Nicknamed “the internet’s most resilient torrent site,” The Pirate Bay is a fan favorite that lives up to its grandiose tag line in practice. Like Demonoid, the website has faced several shutdowns and domain seizures, switching to a series of new web addresses to continue operating and coming back to life every single time.

The Pirate Bay (TPB) was established in September 2003 by the Swedish anti-copyright organization Piratbyrån (The Piracy Bureau); it works as a separate organization since October 2004.

The platform was first run by Gottfrid Svartholm and Fredrik Neij, who are known by their nicknames “anakata” and “TiAMO.” However, since their legal issues, both founders have since stepped down and left the platform to new management.

Like RARBG, TPB is an online index of digital content of entertainment media and software. The site allows visitors to search, download, and contribute magnet links and torrent files, which facilitate peer-to-peer (P2P) file-sharing among users of the BitTorrent protocol.

However, where The Pirate Bay outshines the rest is in mass appeal. According to Alexa, the site was the most visited torrent directory on the World Wide Web from 2003 until November 2014, when KickassTorrents supplanted it. However, In August 2016, the US government shut down KickassTorrents, helping The Pirate Bay regain its throne as the most visited BitTorrent website. For many users today, TPB is the home of all things torrent.

Another name all torrent-powered bootleggers are familiar with is YIFY or YTS. YIFY Torrent is a peer-to-peer release group known for distributing large numbers of movies as free downloads via magnet links on the BitTorrent network. If movies is your thing, YTS will serve you as worthy replacement for Demonoid.

The brand was founded in 2010 by Yiftach Swery, an app developer and web developer from Auckland, New Zealand. His first few uploads were the result of Yiftach experimenting with the x264 video codec to encode HD movies in a way that took up as little hard drive space as possible. Those videos were posted on The Pirate Bay and quickly helped the brand garner a small following.

By August 2011, the YIFY brand was gaining enough traffic to warrant the launch of an official YIFY Torrents Website. The site rose to fame and quickly achieve worldwide domination as the number one source for high quality, low bitrate movies.

YIFY releases were characterized through their HD video quality in a small file size, which attracted many downloaders.

Things changed in 2015 when the original YIFY/YTS website was shut down by the MPAA; however, a website imitating the YIFY/YTS brand still gains a significant amount of traffic.

The new quickly climbed in popularity and was ranked by Alexa as the 183rd most viewed website globally in April 2019. Since gaining such a large user base, the site has been blocked by ISPs in several countries, such as Greece, Australia, and Ireland.

1337x is another Demonoid alternative that is dedicated to the distribution of torrent files and magnet links used for peer-to-peer file sharing on the BitTorrent protocol. The platform was founded in 2007 and stayed on a pretty low rung until 2018 when it shot to fame amidst shutdowns of several competitors.

According to the TorrentFreak news blog, 1337x was the third most popular torrent website as of 2018.

The platform offers some of the best magnet links to files in categories like anime, apps, original documentaries, movies, music, adult movies, TV programs & shows, seasons & episodes and much more.

However, 1337x works more like a torrent aggregator and search engine than as a tracker like Demonoid. The platform is dependent on a few other popular torrent websites. Nevertheless, the platform uses an effective system that correctly checks and assures the availability of the torrent files before serving them for download.

In October 2016, 1337x introduced a modern website redesign with new functionalities and improved search features. However, in the same year, the site was banned from Google search queries and still does not appear when searching through Google search.

LimeTorrent is relatively a newcomer in the space that has garnered attention and gained immense popularity in recent years. LimeTorrent claim to fame is the organization and aesthetics of its website.

If you are acclimatized to the drab aesthetic common on most torrent trackers, you might doubt that LimeTorrent is a torrent site on your first visit. The platform sports an eye-catching lime-themed design, complete with a top of the line user interface.

Every element on the site’s pages are optimized, and you feel like you are visiting a high-end social media site when using LimeTorrent.

The site features a massive array of content, sectioned adequately into groups, with distinctions like “movie torrents” and “TV show torrents” showing up even in general search results. You also get an array of sorting options as well as a handy progress bar beside each magnet link that shows you the health of the torrent.

If you are looking a Demonoid alternative with an improved, modern UI and no ads, LimeTorrents is perfect for you.